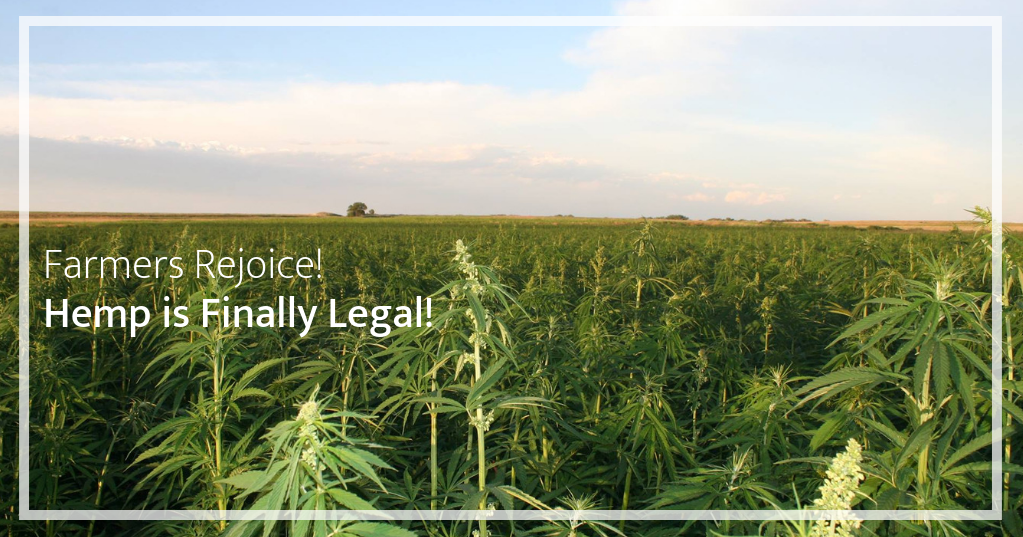 If you are a farmer, then by now you must have heard the good news- it is finally legal to grow hemp again!

DECEMBER 2018 SEES THE HEMP FARMING ACT PASSED
Last year, Congress and President Trump passed a sweeping Farm Bill with overwhelming bipartisan support that included the Hemp Farming Act. The long overdue legislation distinguishes industrial hemp from psychoactive cannabis and lifts the federal ban on the sort of hemp that is found in many everyday consumer products like fabrics and hand lotion. For the first time in many years, it is now legal to grow, sell, and process industrial hemp in the United States. It may seem as though the two major parties find little to agree on these days, but at least Democrats and Republicans alike are able to see the major economic potential of hemp.

HEMP HAS BEEN AN IMPORTANT CROP FOR CENTURIES
That it took so long for Congress to revisit its decision to ban not only psychoactive plants like Cannabis Sativa and Cannabis Indica, but all of their extremely industrially useful relatives as well, is something of a head scratcher. After all, hemp’s usefulness is not a recently unearthed secret. Prior to the twentieth century, hemp was a staple crop in North America and around the world. King James mandated that settlers at Jamestown grow hemp to suit the military and economic needs of England. Hemp was one of three major crops grown at George Washington’s plantation, Mount Vernon. The plant was renowned for its exceptionally strong fibers that could be used to make tough fabrics and ropes suitable for ship masts.

But in 1937, President Franklin D. Roosevelt signed into law the Marihuana Tax Act. At that time, much needed oversight and regulation of the wildly out of control patent medicine industry that ran amok in the nineteenth and early twentieth centuries had morphed into an almost equally reckless anti-drug crusade. The story goes that politicians from states along the Southern border pushed for anti-marijuana legislation as a way of targeting Mexican workers who smoked cannabis, and whom their white constituents accused of stealing their jobs in the middle of the Great Depression. The campaign against cannabis culminated in an outright ban on the cultivation of all hemp, psychoactive or otherwise, that managed to last for 81 years.

HEMP IS USED IN OVER 25,000 PRODUCTS GLOBALLY
In the meantime, however, demand for industrial hemp in the United States has scarcely waned. Hemp remains every bit as useful as it was a century ago. In fact, the list of goods that count hemp among their components only continues to grow. A recent Congressional Research Service report concluded that “the global market for hemp consists of over 25,000 products.” Prior to passage of the Farm Bill, nearly all of the hemp found in thousands of consumer products in the US was imported, and US farmers were unable to capitalize on the enormous demand for hemp both at home and abroad.

Now all of that stands to change. We at Wild West Weed and Seed are here to help farmers get in on the ground floor of what is sure to be an American agricultural revolution. Our viable plant seeds are available to get you started on your entry into the new market for American grown hemp!